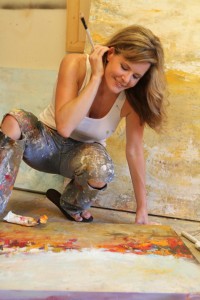 Evident in each passionate and vibrant composition is Donaldson’s strong sense of color and depth of feeling for space and light. This is achieved by her fusion of crushed, powdered, natural pigments with oil paint that are applied in a freely expressive manner. Using tools other than traditional brushes she attacks the surface of the canvas in a direct approach that is additive and subtractive—a process one may associate with sculpture as much as with painting. She lays down luscious, pliant marks across the surface, then scrapes areas of the composition back, then vigorously adds and scrapes again to achieve her goal. Her range of expression comprises the appearance of timeworn erosion of an aging city to the seemingly endless atmospheric depth cloaking a horizon in a hazy light. Sometimes elements of graffiti appear, their looping letters cutting through the roughly layered surface like traces of humanity on aging city walls or an ecstatic cry to the heavens splitting the sky.

Donaldson has attained a signature style that embodies both a sense of immediacy and freshness. Some paintings burst with joy and the bight light from the heavenly realm, then there are those works cloaked in a more intimate softness of an indefinable depth and locale, which, like much of Donaldson’s oeuvre, have an overall atmosphere that recalls European Romanticism and Impressionism. Her work heals through the power of Christ, with an angelic presence that is tangible in the existence of each piece.